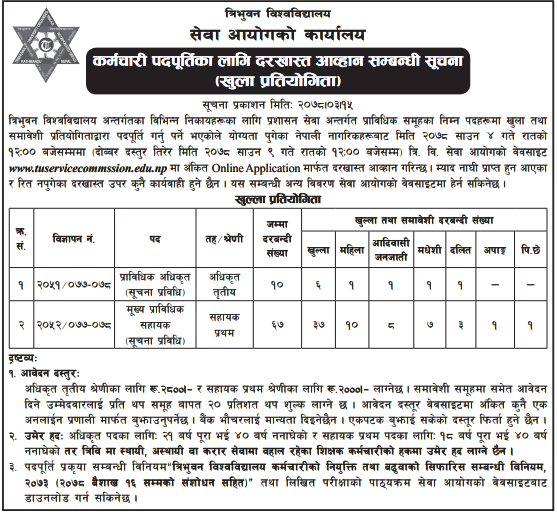 Tribhuvan University (TU), established in 1959, is the first national institution of higher education in Nepal. The Central Administrative Office and the Central Campus of the university are located on the north eastern facade of Kirtipur, an ancient and small town located five kilometers away from Kathmandu city centre. The university covers over an area of 154.77 hectares (3042-5-2 ropanis) of land at Kirtipur. 40After the second democratic movement of 2006, the Prime Minister of Nepal is the ceremonial chief, the Chancellor of the University, whereas the Minister of Education is the Pro-Chancellor. The Vice Chancellor is the Chief Executive of the university. Academic programmes are headed by the Rector the financial management and general administration are regulated by Registrar under the leadership of the Vice Chancellor. Tribhuvan University is a non-profit making autonomous institution funded by the Government of Nepal. On January 8, 2013, the government of Nepal has principally agreed to declare Tribhuvan University as the Central University. There are five institutes and four faculties under which 40 central departments, 62 constituent campuses, and 1062 affiliated colleges in different disciplines are running. Likewise, there are four research centres in TU Being one of the largest universities in the world in terms of its size and the diversity of programmes, it has been able to fulfill the requirements of large number of students.
Industry Type Education - School & College
Location
Organization Size 1-10